Back to the glory days?

In this two part series, we analyze how far Indycar truly has to go in order to get back to "the glory days" which are so often mentioned.  You may be surprised at the similarities and the obvious opportunities that exist.

But how far do we have to go? And is it truly that far away?

Let's start by simply looking at the schedules between 1995 and 2020. The 1995 season kicked off on March 5th, at a street circuit, in Miami, Florida while ending on September 10th, at Laguna Seca, California. Sound familiar?

The surprising part of this, is that we all (fans and participants) complain about the incredibly lengthy gap in the offseason, but the gap was virtually the same for the 1995 season. CART from 1996 onward, had to extend their season as an effort help make up the revenue loss from the Indy500 and the IRL which resulted in 19-20 race schedules in some years. 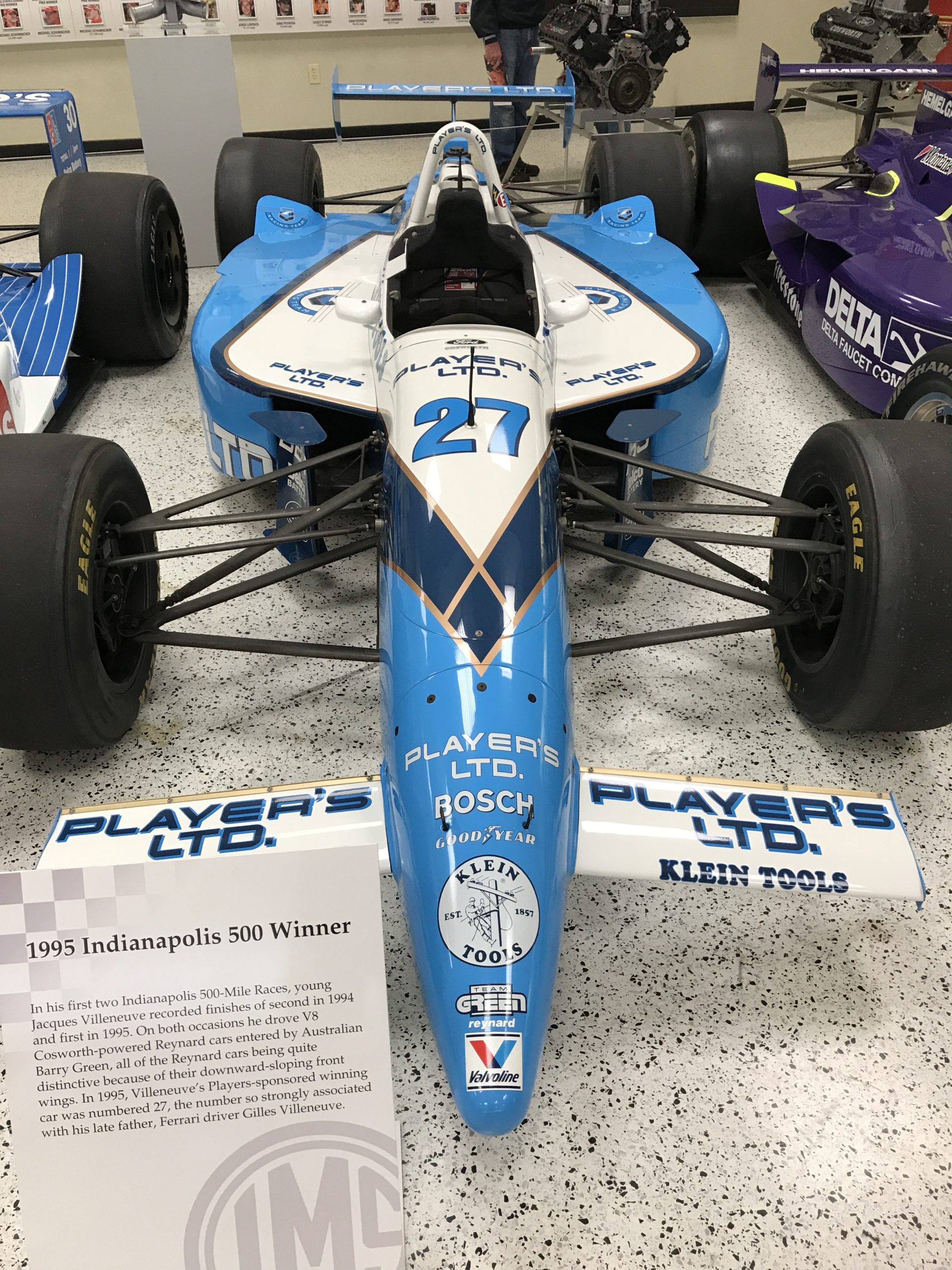 1995 has often been referred to as "The Glory Days" of Indycar racing when Jacques Villeneuve won the Indy500 and the championship. Can Indycar get back to this level of popularity?

Another fairly common consensus amongst fans is the desire to return to more ovals, specifically more super-speedways. "BRING BACK MICHIGAN!" being one of those chants.

The 1995 season only had 6 oval events. The 2020 Indycar season has 5 ovals events. Of course the Indy 500 being the lone commonality between the two. Short ovals at Nazareth, Phoenix, Milwaukee and New Hampshire have been replaced with Richmond, Iowa and Gateway. Not including Indy, the '95 season only had one one additional super-speedway, that being Michigan. Similarly enough, Indycar in 2020 will have one additional super speedway, in Texas (after losing Pocono from 2019).  So perhaps the true void is actually in the short oval category, not super-speedways.

Long Beach, Detroit, Portland, Road America, Toronto, Mid Ohio and Laguna Seca (in addition to Indianapolis) are all races that were on the 1995 schedule and currently on the 2020 schedule. Of the eleven road races in 1995 seven were on temporary/streets (Miami, Cleveland, Vancouver, Surfers Paradise are no more) and four on natural terrain road courses (all exist today).

For the 2020 season five are on temporary/streets (four if you count Detroit as a single event) and six are on natural terrain road courses (COTA and Barber being "new").

There was even a temporary airport track in 1995 (Cleveland) similar (not the same) to one today in St. Petersburg.

Geographically speaking, Indycar traveled twice into Canada (Toronto and Vancouver) vs once now and also had a single "international" date in Surfers Paradise, Australia (something that has been discussed but probably not a reality until 2022 at the earliest).

A significant gap however was left in the disappearance of Pocono, not from a super-speedway perspective rather a location. Indycar lost its presence in the northeast (Nazareth and Loudon both existed in 1995). Could Loudon, New Hampshire become the perfect setting for a NASCAR/Indycar double-header? A track that has major attendance issues which could be boosted by an Indycar race on Saturday afternoon and a NASCAR race on Sunday. Adding to that, NASCAR currently races at Loudon July 19th and is an NBC covered event. A shift in Iowa on Indycars schedule to a week later (current gap) would allow for this to transpire. We have to think this is currently on the radar of Roger Penske, Jay Frye and NBC.

Andre Ribeiro and Michael Andretti battle for the lead at Loudon in 1995.

Overall, 17 tracks built the 1995 season, while 16 (Detroit x2) make up the 2020 season. The only significant difference being a single short oval event and/or one could argue a single international event in order to put Indycar on par with "the glory days" of 1995, in terms of scheduling.

In terms of television, the 1995 season had eleven events on ABC, one lone event on CBS (Nazareth) for a total of twelve on network television. Additionally it had three on ESPN and two on ESPN2 (including the season finale) giving a total of five races on cable.By comparison the 2020 season has seven races on network television (NBC) and ten on cable (NBCSN). The season opener was on ABC and closed on ESPN2 while the 2020 schedule opens on NBCSN and closes on NBC. Additionally,  the 1995 season was on a solely owned network (ABC/ESPN/ESPN2) similar to today (NBC/NBCSN) other than the random Nazareth race on CBS.

Clearly the television broadcasting landscape has changed over the past 25 years so to move five events from network to cable aligns with the times and the enormous amount of content now available for viewers.

Meanwhile the best performing event outside of the Indy 500 for 2019 was Road America on NBC generating 1.1 million total viewers. Interestingly enough, Road America on ABC in 1995 also generated just over 1 million viewers.

SO THERE IS HOPE! But much work to be done. 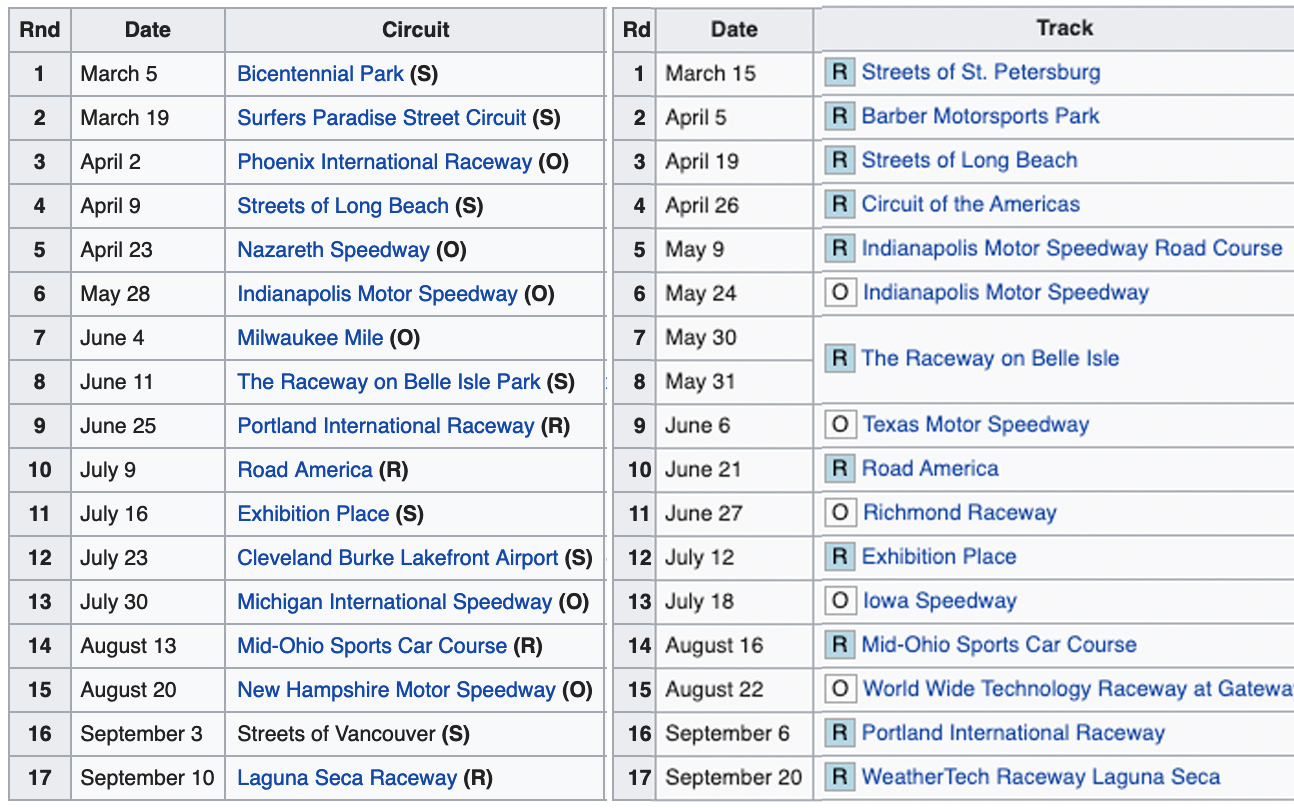 As we evaluate the two seasons you find a schedule with identical season lengths, nearly identical mix of tracks, nine of the seventeen races still the same and a similar tv contract. That’s not bad but at the end of the day, it’s a start.

Just because you replicate a schedule from 25 years ago does not entitle you to the same results. Results in the form of teams, drivers, sponsors and partners, which is what we will evaluate in Part 2 of this series.

Comparing the 1995 schedule with 2020 has a surprising amount of similarities.