It was built as a sister track to Michigan, but mismanagement, politics, and bad luck meant that Texas World Speedway lasted less than a decade on USAC’s calendar….

Deep in the heart of Texas, there once stood a strange sight near College Station – the crumbling hulk of a once-mighty superspeedway. On many weekends, the roar of engines still echoed around the site as local club racers thrashed around the facility’s road course, but track’s giant baked turns and decaying grandstands still sat empty as ghostly relics of the past. It had, after all, been decades since major racing series had raced at Texas World Speedway.

It didn’t have to be like this. With better ownership and management, Texas World Speedway could have become one of the country’s great tracks, like its sister track Michigan International Speedway. But while Michigan rose to the top of the sport under the dedicated leadership of its longtime owner Roger Penske, its Texan sibling faded into obscurity, due in large part to a series of poor decisions from the track’s owners.

The history of Texas World Speedway does not start in Texas, but instead in Detroit, where an ambitious businessman named Larry LoPatin thought it was strange that the automotive capital of the world didn’t have a major racetrack nearby. While LoPatin himself wasn’t much of a racing fan, he thought that a superspeedway near Detroit could be a major moneymaker, so he raised money from shareholders and set about building Michigan International Speedway.

LoPatin’s new track was a success, and if he’d settled for that he likely would have made a healthy profit on his venture. Unfortunately for his shareholders, he decided that if he could make money by owning one track, he could made even more by owning twelve, and set about planning to buy or build tracks across the country for his grandiosely named American Raceways Incorporated (ARI). The first newly-built addition to his empire would be located outside College Station, Texas, and Texas World Speedway opened in 1969.

It was at this point that things started going wrong for LoPatin. Hosting NASCAR races was a key part of his business plan, but he unwisely picked a series of fights with NASCAR boss Bill France. France retaliated by putting onerous financial conditions on Texas World Speedway’s NASCAR races, which together with some lousy weather and the track’s remote location ensured that those races would be money-losers. ARI’s investors finally had enough and pushed LoPatin out in 1970, and ARI itself went bankrupt shortly afterwards.

A fellow named Roger Penske decided to get into the racetrack ownership business and bought Michigan. If Penske had bought Texas World Speedway as well, its history might have been very different, but despite rumors of interest it never happened. Nonetheless, new management took over at Texas and decided to bring in the USAC Indycars to prop up the track’s flagging finances.

At first glance, Texas World Speedway was nearly identical to its sister track in Michigan, with both tracks being 2-mile D-shaped ovals. When the tracks were first built, the only notable difference between the two was that the banking at Texas was slightly higher than that at Michigan, meaning that Texas was theoretically the faster of the two tracks. This advantage was gradually negated, however, by the feature that would ultimately doom the Texas track: bumps.

Within a decade of its construction, Texas World Speedway became one of the bumpiest tracks on the USAC and NASCAR calendars. In contrast to Roger Penske, who diligently improved and maintained his new purchase in Michigan, Texas World Speedway’s new owners didn’t bother putting money into their track. The result was deteriorating facilities and an increasingly bumpy track. While lap speeds at Texas were faster than those at Michigan in the first half of the 1970s, by the end of the decade Michigan was faster.

The finish to the 1978 USAC event at Texas World Speedway

USAC first raced at Texas World Speedway in 1973, holding races in April and October. The track immediately proved to be the fastest in the series – Mario Andretti qualified on pole for the October race with a speed of over 214 mph. By contrast, the pole speed at Indianapolis that year was 198 mph, and wouldn’t reach 214 mph for more than a decade. Once the racing started, the track unsurprisingly raced similar to Michigan, with the wide, fast turns facilitating plenty of side-by-side action.

The 1973 races were relatively well-attended, but USAC wasn’t back in 1974. In fact, no series was back in 1974 – the track effectively shut down as an oil crisis hit the US. While the track’s location between Houston, Dallas, and San Antonio theoretically allowed it to draw fans from all three, in reality it was over an hour’s drive from any of them, which hindered the track’s attendance at the best of times. Asking fans to make the drive while gas rationing was in effect would have been out of the question.

USAC didn’t return to Texas until 1976. By that point the cars’ wings had gotten smaller and the track’s bumps got bigger, so speeds were down considerably compared to 1973; Andretti’s qualifying lap record was never bested. By 1977 the track had settled into a regular spot on USAC’s calendar, hosting a race in early April and another in late July or early August. The track was kind to its fellow Texans – A.J. Foyt won four races at the track, while Johnny Rutherford won two.

The Texans’ success wasn’t enough to bring fans to the track, however. The track’s location was less than ideal, and the facilities gradually deteriorated through the 1970s. The weather was unhelpful as well – the track’s early attempts to build a fanbase were hindered by frequent rain, and USAC’s typically boneheaded decision to hold one of their races in the summer heat of Texas likely kept many fans away. By the 1978 season, attendance for the USAC races at the track was sparse.

While Texas World Speedway’s poor attendance and worsening track conditions likely would have cost it its Indycar races at some point in the early 1980s, its departure from the schedule was hastened by politics. When CART split from USAC in 1979, Texas World Speedway’s management sided strongly with USAC. This quickly proved to be a poor choice – the track’s 1979 spring USAC race had only 15 starters as CART’s stars stayed away. The summer race fared little better, as it became obvious that CART was going to be the future of US open-wheel racing. The track appeared on the calendar for the short-lived 1980 joint CART-USAC season, but the race was canceled.

Most USAC-affiliated tracks eventually jumped ship to CART as USAC’s series crumbled, but Texas World Speedway was not among them. By the time the first Indycar split came to a close in 1981, Texas World Speedway’s track surface was too bumpy for top-level racing. Both CART and NASCAR demanded that the track’s owners repave the track if they wanted future races. The owners ground down a few bumps and insisted that everything was OK, but this wasn’t enough for either series. CART never raced at Texas World Speedway, and by 1982 the track had lost its NASCAR date too.

At this point, a strange thing happened at Texas World Speedway. The same issues that had crippled it as a major racing venue turned out to be key assets that kept it alive for decades as a club racing track. The track’s remote location meant that nobody wanted to tear the track down for housing, and the lack of investment meant that it was cheap to rent. While the facility’s oval sat empty, the road course became a hotspot for club racing and track days. It was still bumpy, but the local racers didn’t complain too much – for a long time there weren’t any other big road courses in Texas for them to race on.

Texas World Speedway had a brief revival in the early 1990s, as a new owner tried to fix the track up and bring major racing series back. The attempt failed after a few ARCA races. The renovations enabled a few Indycar tests though, one of which saw John Andretti turn a 234-mph lap in 1993 – over 10 mph faster than the Indy pole speed that year. One only has to look at the speeds CART cars achieved at Fontana, another Michigan-like track, to see what CART cars might have been capable of doing at a revamped Texas World Speedway.

Sadly, that full revamp never came. Any talk of rebuilding the track to be the Texan home of NASCAR and Indycar effectively ended when Texas Motor Speedway opened outside of Fort Worth in 1997. Texas World Speedway soldiered on for another decade, but the suburban sprawl of College Station finally reached the property in the mid-2010s. The track closed for good in 2017 and, after a brief stint as a giant parking lot for cars damaged by Hurricane Harvey, is being turned into a housing development. The final death knell for the oval came in 2018, when developers tore down most of the banking.

The fates of Michigan and Fontana show that Texas World Speedway’s story didn’t have to be the way it was. If Roger Penske had bought the track along with Michigan in 1972, it’s hard to imagine him refusing to repave the track as the surface deteriorated. It’s also certain that the track wouldn’t have ended up on the wrong side of the 1979 split, as Penske was one of CART’s key leaders at the time. The track would have still been in the middle of nowhere, but so is its Michigan sibling – Michigan’s distance to Detroit is about the same as Texas World Speedway’s distance to Houston – and that didn’t stop Penske from making Michigan a huge success before he solid the track in 1999.

But alas, things didn’t work out that way, and Texas World Speedway is now little more than a distant memory in the history of Indycar racing. 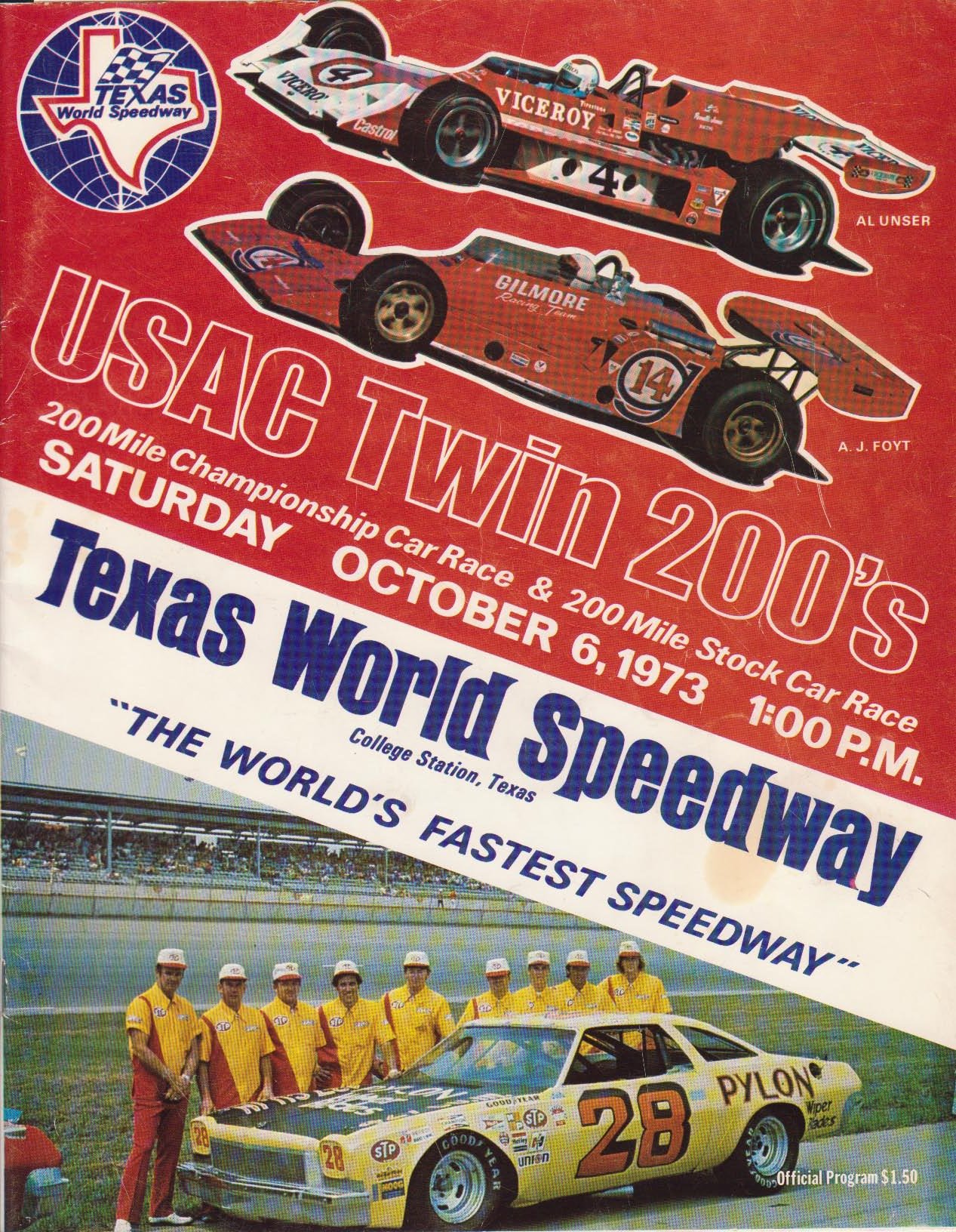 The program for the USAC event in 1973