Autodromo Ciudad de Rafaela in Rafaela, Argentina played host to the USAC Champ Car Series in 1971. It lasted one year and was the last time "Indycar" held a race in Argentina.

It was February 1971, and the USAC Championship Car series was starting a new era. After decades of racing a myriad of dirt ovals, paved ovals, road courses, and even hillclimbs alongside the Indy 500, USAC had separated the dirt tracks and road courses off into their own respective championships, leaving the top-tier series to race exclusively on paved ovals. With Marlboro coming on as a title sponsor, the United States’ top open-wheel racing series was taking a big step into the future, and it all started under the skies of Argentina.

American open-wheel racing’s first foray into South America was the brainchild of Virgilio Marquez, a leader of Atletico de Rafaela, a sports club that owned a large oval track north of the city of Rafaela, Argentina. Marquez attended the 1970 Indy 500 and decided that his hometown track an event just like it. USAC officials were receptive to his interest, especially when they found out that Marquez and friends were willing to pay USAC $90,000 for the race, a substantial sum by USAC’s standards at the time.

The idea of holding a USAC race in Argentina wasn’t quite as preposterous in 1971 as it may seem today. Argentina had a rich racing history, and the country had been the first overseas destination for the Formula 1 circus back in the 1950s. Those races had been wildly popular among the locals, thanks in large part to the legendary Juan Manuel Fangio, whose dominance of Formula 1 was a not-too-distant memory in 1971. The country also had a strong domestic racing scene at the time, which was about to produce another successful F1 driver in Carlos Reutemann.

That said, there were still big reasons to question the wisdom of taking USAC to Rafaela. Unlike F1, USAC had no history of major Argentine involvement and no full-time Argentine drivers at the time. In addition, the location of the Rafaela track was far from ideal; while F1’s Argentine track was close to the heart of Buenos Aires, Argentina’s capital and largest city, Rafaela was a town of fewer than 100,000 people located over 100 miles from the nearest major city. USAC was also hardly a major player on the international scene at the time; the series’ only previous ventures out of North America were one-off non-championship races in Monza, Italy and Fuji, Japan.

The event at Rafaela was initially supposed to be one of those non-championship races as well. With this in mind, most of USAC’s top teams and drivers decided to stay home, and some decided to pick up an extra paycheck by racing in a NASCAR race the same weekend. The Argentine organizers were understandably not pleased to find out that USAC’s main stars would not be at their event, and asked USAC for help. USAC responded in typical fashion, by changing the rules at the last second. Ten days before the cars were supposed to leave for Argentina, USAC announced that the event would count for the championship!

As with many of USAC’s spur-of-the-moment decisions, this one was not popular within the paddock, to say the least. The always-quotable Andy Granatelli summed-up the mood, saying “This championship has historically been based on races run in the Continental United States, and I don't think Argentina has been annexed by the United States." Granatelli’s feelings may have been influenced by the fact that his only available car for Mario Andretti had been damaged in a testing crash, forcing Andretti to stay home while most of his competitors caught their flights to South America. AJ Foyt was another star who did not make the trip, as he had already committed to the NASCAR race that weekend. Most of the rest of the field, however, brushed up on their Spanish and headed to Argentina.

Above: The Program for the 1971 race. Photo credit: https://indycaraldia.com/

When the USAC field arrived in Rafaela, they found a fearsome track awaiting them - one that would be revered as an almighty temple of speed if it had stayed on the calendar. What became the Autodromo Ciudad de Rafaela had started life as a crude dirt oval for Argentina’s Turismo Carretera series in 1952. The track was paved in 1966, and in anticipation of the USAC race the locals had widened the track, increased the banking in the turns, and installed new guardrails.

The track was unlike any other seen in Indycar’s history. Its two straights were each almost 50 percent longer than those at Indianapolis, and they were connected by banked turns that resembled those at Michigan, both in radius and banking. Altogether the track was nearly 2.9 miles long, making it one of the longest ovals ever used for top-level racing. And, as USAC’s teams were about to find out, it was also one of the fastest.

The racing at Rafaela was fast and intense. Lloyd Ruby qualified on pole with an average speed of over 173.184 mph, almost 3 mph faster than the pole speed at the previous year’s Indy 500. On race day, nearly 40,000 fans showed up, which filled the track’s grandstand but still looked small given the immense size of the track.

The fans were treated to terrific racing throughout the field, as the field broke out into several smaller groups, with fierce drafting battles going on in each. In the first of the twin 150 mile races Al Unser battled with Ruby for the lead, while Mike Mosley and Swede Savage staged an intense race-long battle for third.  Unser ultimately took the win, lapping everybody in the field except for Ruby. Unser ran away from the field in the second race to take a dominant win. The latter race was punctuated by a fiery crash involving Bentley Warren, who was fortunately able to escape unscathed before the inferno engulfed his car.

The 1971 races would end up being USAC’s only venture to Rafaela. The series had the track on the first drafts of its 1972 calendar, but ultimately dropped it from the final version. The race had been a questionable venture in the first place, and the full grandstands and exciting racing weren’t enough to convince USAC to go back. Like USAC’s previous overseas ventures, the Rafaela race become a one-off, and no major US open-wheel series has returned to Argentina.

In theory, Indycar could go back to Rafaela, but it’s almost certainly never going to happen. The oval track still exists, but the facility would require major upgrades to be suitable for Indycar, and the same issues that made a trip to Argentina a questionable idea in 1971 still exist today.

The Rafaela oval still exists, and Argentine domestic touring car series held races on the oval layout until a series of terrible crashes in the late 1990s and early 2000s. Today the local series race on the facility’s infield road course or on a modified version of the oval that includes three chicanes. The track lacks some basic safety features such as catch fencing all the way around the track, not to mention modern developments like SAFER Barriers. The track would also need a new pit lane, a new paddock, new grandstands, and a wider racing surface to meet Indycar’s requirements. 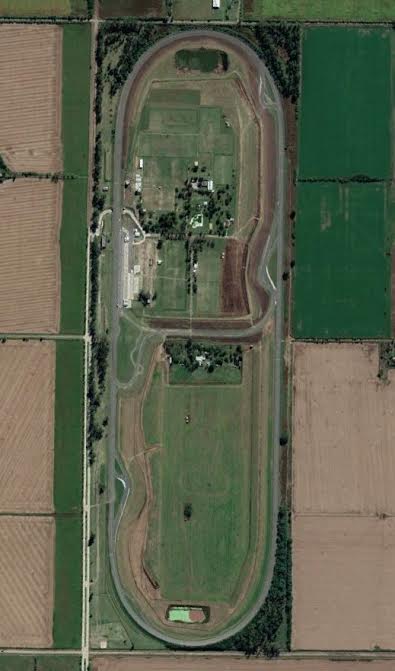 Current shot from google earth of the track

Track issues aside, there also isn’t much of a business case for taking Indycar to Rafaela. While plenty of drivers and sponsors from neighboring Brazil have graced Indycar’s grids, Argentina hasn’t had much of a presence in the series, despite the best efforts of Ricardo Juncos. And if Indycar did decide to go back to Argentina, there are several other tracks that are far more ready to host a race than Rafaela is, including the Termas de Rio Hondo circuit that hosts MotoGP, the former F1 circuit in Buenos Aires, and the spectacular Portero de los Funes circuit that hosted international sportscar races in 2008 and 2010.

Promoters at the new San Juan Villicum circuit, which hosts Argentina's Superbike World Championship round, have talked to Indycar's management about a potential race, but nothing has come of those talks so far.

It’s a shame, because modern Indycars on the Rafaela circuit would be a sight to behold. Having the drafting battles we’ve seen in the DW12-era Indy 500s playing out on much longer straights and higher-banked corners would be spectacular, and the speeds would be unmatched. With the cars reaching 240 going into Turn 1 at Indianapolis, would 250 on Rafaela’s longer straights be out of the question? Regardless, it would be some of the most intense racing ever seen.

But alas, such racing will likely have to stay in our imaginations.