Today it's best known as a sportscar venue, but back in the late 1970s Canada's Mosport Park hosted the first road course race of USAC's modern era....

By the mid-1970s USAC had series settled into a rhythm of racing at the same American ovals year after year. For all of USAC’s faults (and there were plenty of them!), the series understood date equity, and for almost a decade the series enjoyed a degree of schedule stability that would be unheard of today. Each season started in California or Phoenix in March and ended in Phoenix in early November. Outside of the dogleg at Trenton, every turn was a left turn, until USAC decided to take another venture beyond the US border in 1977, to the sweeping hills and turns of Canada's Mosport Park

The late 1970s weren’t the first time USAC had raced at Mosport. The series had also raced at the track a decade before, in 1967 and 1968. Much had changed, however, since those days. For starters, the cars had sprouted proper wings and gotten rid of the grooves in the tires. USAC had also ditched the road courses that had been a somewhat regular feature of the schedule in the late 1960s, so the twisty track at Mosport was somewhat new experience in 1977.

It’s not clear why USAC decided they had to go to Canada to go road racing when there were plenty of great road courses available in the series’ home country. The lack of ovals in Canada may have been a factor - if you wanted to race top-level cars in Canada at the time, you had to turn left AND right. Regardless of the reason, it was the start of a trend that has continued to this day - since Mosport was added to the calendar, fans of American open-wheel racing have had at least one road course race to watch every year.

USAC’s first road course race in almost a decade came on a fearsome track that could make even the most fearless driver take notice. Decades later, Juan Pablo Montoya, a driver who is not exactly easy to intimidate, summed up Mosport by saying “this place will scare the hell out of you.” The track’s fast, sweeping turns and huge elevation changes combined to make nearly every corner a blind one, and with runoff areas basically nowhere to be found, any mistake earned a driver a one-way ticket to a wall, usually at a high rate of speed.

Mosport had opened as a purpose-built road course about an hour east of Toronto in 1961. The legendary Sir Stirling Moss had helped to design the track, and it quickly became a popular venue for sportscar racing. International stars such as John Surtees, Pedro Rodriguez, and Bruce McLaren all took wins at Mosport in the tracks’ early years. Reigning F1 World Champion Surtees was nearly killed in a sportscar crash at Mosport in 1965. In 1967 the first-ever Formula 1 Canadian Grand Prix was held at the track, and after a few years of alternating with Mont Tremblant, Mosport became the regular home of the Canadian GP in the early 1970s.

Unfortunately, while open-wheel racing cars evolved rapidly between the late 1960s and late 1970s, Mosport didn’t. A combination of harsh Canadian winters and poor maintenance made the track extremely bumpy. The rest of the track was falling apart too. When an F1 car hit the wall at Turn 1 during practice for the 1977 Canadian GP, the wall simply fell over. During the same event another car flew clear over the wall and crashed into a TV camera tower. The driver survived, but F1 had seen enough - the Canadian GP moved to Montreal and F1 never returned to Mosport.

Considering the fact that USAC hadn’t raced on a road course in almost a decade, the series’ drivers adapted surprisingly well to the Mosport track, at least for the first race there. The 1977 race saw only two retirements due to accidents, both coming late in the 75-lap race. The cars, however, had a tougher time adapting to the whole braking/accelerating/changing gear/turning right thing, not to mention the massive bumps, and less than half of the field finished the race. Al Unser led the race early until his half shaft failed. Rookie Danny Ongais inherited the lead, but his car failed 10 laps later. Ongais’ performance, however, was impressive enough to earn him a ride in that fall’s Canadian Grand Prix at Mosport, where he nearly scored a point. After Ongais’ retirement, A.J. Foyt, whose road racing prowess was always underrated, took the lead and won USAC’s first road race of the modern era.

USAC returned to Mosport in 1978, only for an FIA representative to inform USAC that the race could not take place, as the track did not meet the FIA’s safety standards. USAC’s President responded that the FIA had no jurisdiction over a USAC event, and the race weekend went ahead. While USAC was right about the jurisdiction issue, the FIA official may have had a point about the track’s condition, and a string of practice crashes knocked three cars out of the race weekend and damaged several others. The next day Ongais took pole, before joining the list of crashers while trying to beat the F1 lap record set the previous year.

The shenanigans continued onto race day. The Canadian fans had left their normal politeness behind for the weekend and, after torching several spectators’ cars, took their pyromania a step further by burning a hole in the track. The damage was repaired in time for the race, but the fans then caused an early debris caution by throwing a beer bottle onto the track. In fact, the yellow flags got plenty of action early on, as the crash fest from practice carried over to the race. The mechanical unreliability from the previous year also continued, and by the end only seven cars were running, led home by the dominant Ongais. 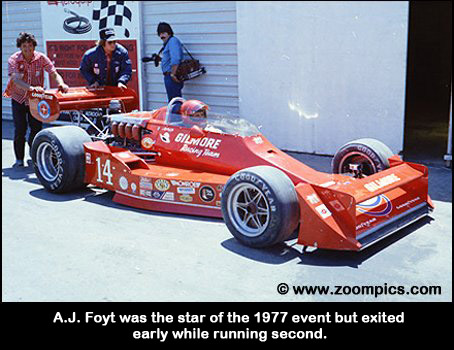 By the time the USAC series left Mosport in 1978, the track wasn’t the only thing falling apart. USAC, beset by its own incompetence, then by tragedy, was crumbling. Tony Hulman’s death in late 1977, followed by the deaths of eight USAC leaders in a plane crash in early 1978, left the organization without its patron and key leaders, just as the series’ owners were growing restless. Dan Gurney’s White Paper crystallized the owners’ discontent over USAC’s failures in early 1978 and called for major reforms to the series. USAC refused to compromise with the owners, and by the start of the 1979 season most of the series’ key owners had formed their own series under the Championship Auto Racing Teams (CART) banner.

CART included Mosport in its first schedule, possibly because the new series needed any track it could get at the time. Most tracks initially remained loyal to USAC, and CART’s first schedule had only 8 races. However, tracks’ allegiances gradually shifted in early 1979, allowing CART to add more established ex-USAC races to its schedule and drop Mosport. Mosport remained a fixture in the sportscar racing world, but CART never raced at the track.

For the two decades after US open-wheel racing’s departure from Mosport, the track’s condition and safety standards made a return unrealistic, but today the track is probably in good enough shape to host an Indycar race. The track continued to deteriorate through the late 90s, and most top-level series abandoned the track after a fatal crash a World Endurance Championship race in 1985. In 1998, however, Don Panoz, the owner of the then-new American Le Mans Series bought the track and finally began to give the track the repairs and upgrades it so desperately needed. Panoz sold the track to Canadian sportscar legend Ron Fellows in 2011, and Fellows’ team has continued to build the track into a world-class facility.

Under Fellows' leadership Mosport Park was renamed to Canadian Tire Motorsport Park, but the track remains fearsome. Mosport is one of the few tracks remaining from the early 1960s that continues to hold major races on an effectively unchanged layout. Safety remains an issue - the track still combines fast corners with runoffs that are quite small by modern standards, and it's still pretty bumpy. Popular former Star Mazda racer Jeff Green lost his life in a vintage racing crash at Mosport in 2018, and 2017 Star Mazda champion Victor Franzoni had a monster crash at the track in this year’s IMSA race.

The key issue keeping Indycar from racing at Mosport, however, is the presence of Indycar’s Toronto race less than an hour away. While many in Indycar would love to see the series expand its presence north of the border, holding its only two Canadian races in such close proximity is probably unwise. With that in mind, a return to Mosport is unlikely, at least until the day comes when more construction around Exhibition Place in Toronto makes it impossible to hold a race there. If that ever happens, Mosport will probably be the first place Indycar looks to keep its Canadian presence alive.