It’s best known as the home of Formula 1 in Great Britain, but once upon a time the Silverstone Circuit was an Indycar track….

Great Britain’s Silverstone Circuit is synonymous with Formula 1. The track held the first-ever race of the modern Formula 1 World Championship, has held more F1 races than almost any other track, and remains the popular host of F1’s British Grand Prix. But for a few months in the late 1970s, the official track record at Silverstone wasn’t held by an F1 car, but instead by a USAC Indycar….

The idea to bring USAC to Silverstone came from a British company called Motor Circuits Developments (MCD), who decided they wanted some extra events for the tracks they owned. Silverstone wasn’t actually an MCD-owned track, but bringing the USAC series across the Atlantic Ocean for just one race didn’t seem wise, so MCD booked a race at Silverstone to precede their race at MCD-owned Brands Hatch. The two races would be held in October, near the end of the 1978 season.

The Silverstone Circuit is one of the world’s legendary tracks. Following World War II, a group of locals started holding races on the perimeter road of an abandoned Royal Air Force bomber base. As Britain’s best pre-war circuits had been heavily-damaged during the war, the new Silverstone track quickly became the home of British motorsport, and it held the first race of the new Formula 1 World Championship in 1950. By the late 1970s, Silverstone had settled into a rotation with Brands Hatch, with each hosting the British Grand Prix every other year.

Silverstone’s layout in 1978 had changed little from the early 1950s. The track’s classic layout consisted of eight corners – five fast, 90-degree right-handers and three flat-out left-hand kinks. The only change to this layout had been the addition of a much-loathed chicane at the final corner a few years before. The Europeans regarded Silverstone as a temple of speed in the 1970s, as it was one of the fastest tracks in Formula 1 at the time, but it was still twisty by the standards of the USAC racers who were used to ovals.

Onboard of a Formula 1 car at Silverstone in 1979, showing the same layout USAC ran.

As USAC arrived at Silverstone, it became obvious that MCD’s plan to sell American open-wheel racing to British fans, while perhaps a good idea on paper, had some major flaws. For starters, bringing the entire USAC series to another continent was prohibitively expensive. USAC therefore decided to only take 16 cars across The Pond, and it decided to pick these cars by holding a special qualifying session at Michigan. It’s not clear why USAC thought it was a good idea to pick the starters for two road course races by holding a qualifying session on a superspeedway, but USAC’s decision-making in the late 1970s wasn’t exactly ideal.

The bigger problem, however, was that USAC didn’t have any rain tires. That wasn’t a problem back in the States, where the series only ran on ovals, but anybody who’s lived in Britain can tell you that you’re probably not going to get three straight days of dry weather in October. And sure enough, USAC’s teams and drivers spent most of the weekend sitting in the pits and staring out at a wet track. The British crowd, who were used to seeing cars bolt on rain tires and head out for a wet race, were not impressed.

Once the track dried, however, the Brits were quite impressed with the speed of Danny Ongais, who blitzed the field to take pole with a lap that was over two seconds faster than the pole for the previous year’s British Grand Prix at Silverstone. While the F1 cars’ fatter tires and superior aerodynamics meant that they were faster than the USAC cars in the corners, the USAC cars’ turbocharged engines gave them a big speed advantage over the F1 cars down Silverstone’s long straights. In fact, Ongais’ pole time was nearly fast enough to beat the ground-effects Lotus 79 that was dominating F1 in the hands of Mario Andretti in 1978. The Lotus made its debut at a non-championship race at Silverstone earlier that year, where Ronnie Peterson set pole with a time that was less than 0.2 seconds faster than Ongais’ time.

The F1 cars weren’t the only ones who couldn’t match the Flyin’ Hawaiian’s pace. Al Unser was the only USAC competitor to get within 2 seconds of Ongais, and most of the field was over 4 seconds behind. Even with Ongais 2 seconds under the previous year’s British Grand Prix pole time, only six of the USAC drivers set qualifying times that would have even put them in that British Grand Prix field. Last-placed qualifier Spike Gehlhausen qualified over 18 seconds off the pole!

Race day was washed out by more rain, so the race was held the next day. The rolling start was new to the British fans, as was the full-course yellow that quickly followed it. The Brits weren’t fond of the latter – aside from one aborted use in the early 1970s, the safety car wouldn’t be introduced to F1 until 15 years later. Once the race got going properly Ongais left the rest of the field behind, taking the official lap record along the way. His dominance ended a few laps later, however, when his car’s half shaft broke. It was that kind of season for Ongais – every race that year he either won, finished 4th, or didn’t finish.

Ongais’ demise left Al Unser in the lead, but he ran out of fuel just before his pitstop a few laps later, handing the lead to Gordon Johncock, who promptly repeated Unser’s mistake. That left a young Rick Mears in the lead, but after a brief stoppage for more rain he found himself under pressure from a charging AJ Foyt. Foyt’s presence at the front was surprising – he had only qualified 10th, over seven second off the pace, and his outdated Coyote chassis was an oval car. Nonetheless, Foyt passed Mears a few laps after the restart and pulled away until the rain returned a few laps later. This time, USAC called it quits and declared Foyt the winner after 38 of the scheduled 52 laps. Surprisingly, the race would be the last time Foyt won against Indycar’s best; the only other Indycar wins of his career came against rump USAC fields after CART split off in 1979.

USAC’s trip to Silverstone ended up being a one-off. The combination of lousy weather, the one-day delay, and a lack of local interest meant that the crowd at 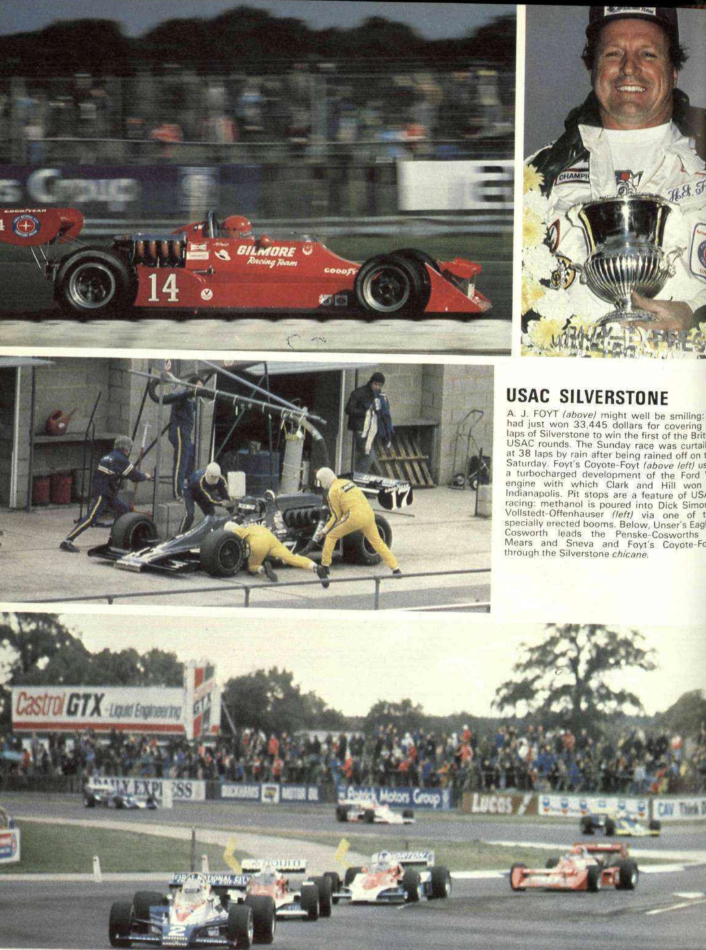 Silverstone was paltry, and the crowd at Brands Hatch the next weekend wasn’t enough to make up for it. The whole adventure was a money-loser for MCD, and the impending CART-USAC split made a return even less likely.

The unfortunate truth was that USAC didn’t have much to offer the British fans that they didn’t already have. The mid-1970s had been a golden era for F1, and USAC’s 16 cars seemed paltry compared to the 30 that had raced at the previous year’s British Grand Prix. The F1 field was much more competitive too; the 1.9 second gap between 1st and 2nd in the USAC qualifying would have covered the gap between 1st and 26th in the F1 qualifying. USAC’s cars were faster than the F1 cars, but that advantage didn’t last long – F1 speeds skyrocketed in the late 70s and early 80s as ground effects and turbocharged engines proliferated through the field.

A USAC race on a superspeedway might have caught on with the British fans, since it would have been something new and different from what they were used to. Unfortunately, Britain didn’t have any of those in the 1970s – the legendary Brooklands oval hadn’t survived World War II intact. That said, CART’s attempts to race on newly-built ovals in Europe in the early 2000s wasn’t a huge success, so oval racing may not have been the key to European fans’ affections after all.

Indycar could race at Silverstone, but it probably won’t anytime soon. From a technical perspective, the track could easily host an Indycar race – it remains a world-class motorsports facility and is the home of F1’s British Grand Prix. Indycar’s drivers would probably enjoy a trip to Silverstone too. While the track’s layout has changed beyond recognition from 1978, it’s still a terrific collection of fast corners and long straights that is highly popular with drivers and fans alike.

Today’s Indycar could find a receptive audience in the UK. With Indycar’s great racing, beautiful and loud cars, and fan frustration over the current state of F1, there could be a place for another professional open-wheel series to gain a foothold. Indycar’s far-lower ticket prices would almost certainly help too. But if Indycar were to go back to the UK, Silverstone might not be their preferred destination. The laptime comparisons between Indycar and F1 are far less favorable for Indycar today than they were in 1978, Silverstone’s high international profile means they’d be unlikely to offer Indycar a favorable financial deal. Some of Great Britain’s other fantastic tracks, such as Brands Hatch or Donington, are capable of hosting Indycar and would likely offer the series a better deal than Silverstone would. 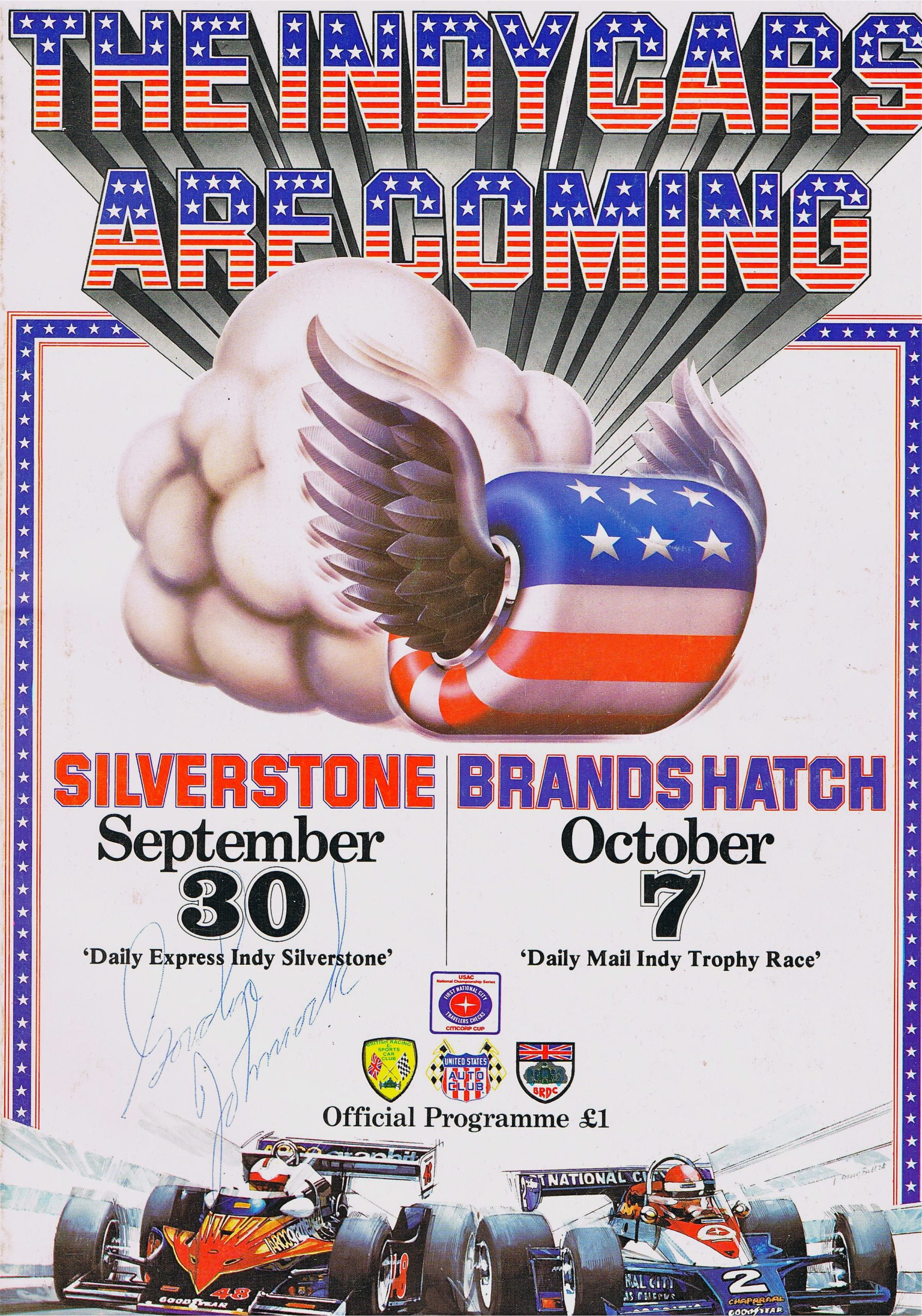 The program for the USAC event in 1978

Regardless of the track, some of the factors that led to USAC’s failure at Silverstone still remain, however. The biggest issue is that cost of taking the series across the ocean remains enormous. CART dabbled with racing in Europe in the early 2000s, and while the three races in the UK drew decent crowds, they weren’t enough to make up for the travel costs. CART’s sponsors weren’t terribly fond of the trip to Europe either – many of them don’t have business outside of North America, and racing in Europe puts races on TV at lousy times in the US. New series owner Roger Penske has indicated that the series will focus on racing in North America for the time being, so for now Indycar’s 1978 trip to Silverstone will likely remain their only trip.