In this three-part series, SK Chow chronicles the fascinating stories behind the lineage of cars which made up the 1996 #indy500 which was sanctioned by the IRL but used old CART equipment.

In the years leading up to The Split, the march of technology at Indy was chronicled in great detail by Carl Hungness in his famed yearbooks. One detail that Hungness typically included in his yearbooks was the racing record for each chassis that qualified for the “500”. Unfortunately, the politics at the time meant that Hungness was disallowed access to the Speedway’s photographs and records in 1996. Therefore, we do not have a single place with the histories of the cars. It is particularly sad that this would occur during the one year that most cars had stories to tell!

And so, I hope to bring together the backstories of those cars in this article, using information gathered from official IMS trackside notes, newspaper articles, and recollections of those who were there. These are the stories of the 49 cars that made it on track during May 1996, from the mighty Lola-Menards to the ancient Lola-Buicks, and everything in between.

For fans and competitors of American motor racing, the spring of 1996 was a sudden rupture of the landscape. What was once so familiar was being swept away, and after two decades of ever-increasing success, the sport was dealing with the fallout of what would be known as “The Split.” One championship had become two, and the result was a bitter feud between two camps.

On one side was the Indianapolis Motor Speedway, the venue of the famed 500-mile race. The Speedway had recently created a new series, the Indy Racing League (IRL), which was meant to reduce costs and create opportunities for American oval track drivers at the top level of the sport. The new series, which centered around the Indianapolis 500, planned to adopt a radically new, cheaper formula with normally aspirated production-based engines and chassis that came from three approved constructors. But this new formula wasn’t ready for 1996, and instead of delaying the start of the series, the IRL allowed Indy cars built from 1991 to 1995 to compete in its inaugural races in 1996. 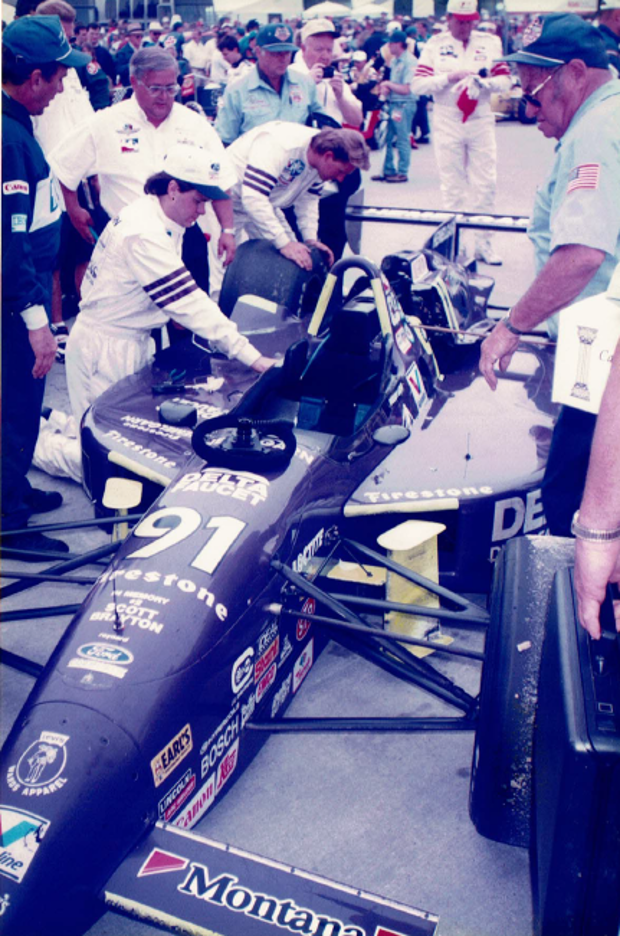 Buddy Lazier won the race in this Reynard 95I which used to be a Ganassi car. (Photo: Mike Burrell)

One of the earliest supporters of this new series was Team Menard, which had invested heavily in the development of the Menard V6 engine over several years. For years an “Indy-only” competitor, Menard ran the powerful but unreliable stock-block Buick V6 before taking over development of the engine when Buick officially withdrew from the sport. By 1995, Menard was virtually alone in campaigning a stock-block engine, while most other competitors leased their power units from Ford Cosworth, Mercedes-Benz/Ilmor and Honda. However, the team had proven their speed during the 1995 Indianapolis 500, taking two spots on the front row and completing all 500 miles with Arie Luyendyk, in their famed “humpback” Lola cars.

Although the IRL did not allow any Indy cars newer than the 1995 model year in its first season, Menard signaled that they would be a serious competitor by purchasing new (but ’95-spec) Lola cars to supplement their existing fleet of four cars. While most IRL teams had planned on running “used” machinery for 1996, team owner John Menard told Robin Miller of the Indianapolis Star that “Lola is going to improve on what they’ve got... Indy is still the most important race, and Lola wants to win it so they’ll do some things to make [the car] faster.”

While Menard was putting together the ingredients to contend for an Indy win, some entrants were happy just to have the opportunity to make it to the Speedway. Take the example of Loop Hole Racing, a tiny outfit owned by Bud and Dave Hoffpauir from Colorado. They entered a ‘91 Lola that was originally raced by Danny Sullivan with an Alfa Romeo motor. Subsequently, it was sold to Leader Card Racers and raced in the 1992 Indy 500 by Buddy Lazier. At the end of 1994, the car was sold to the Hoffpauirs for $35,000. The car was converted into a Pikes Peak hill climb racer and completed the climb in 9 minutes with former champion David Donner at the wheel. Remarkably, it was also entered in the American IndyCar Series, a lower-tier series that used old Indy cars, winning three races during this period. Finally, the car was tested at Phoenix in 1996 before running in official practice at the Speedway as #36. 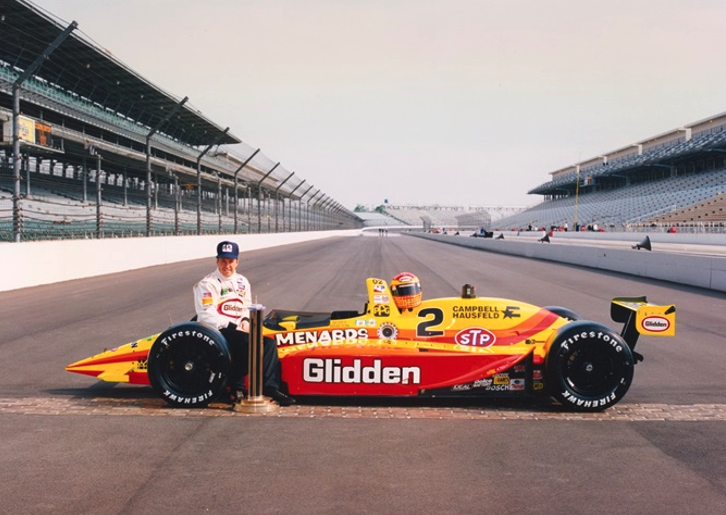 Scott Brayton won the pole for the second year in a row, but was tragically killed in a practice crash. (Photo: IMS)

Dan Drinan, who was assigned to drive the Loop Hole entry, represented the kind of personality that the Speedway wanted to promote. He himself had an interesting path to the 500: a mechanic in his past career, having worked on Mario Andretti’s championship winning car in 1984, and subsequently with Michael Andretti, Scott Brayton and Tom Sneva. Drinan himself then became a driver in USAC midgets and Silver Crowns.

Menard and Loop Hole represented two extremes in the entry list for the 1996 Indianapolis 500. The list was a diverse collection of ‘92 Lolas next to ‘95 Reynards, Ford Cosworth V8 vs. Menard V6, and a solitary Mercedes-Benz/Ilmor entry. The teams were a mix of the familiar, such as longtime participants A.J. Foyt Enterprises and Hemelgarn Racing, and rookie teams, such as Bradley Motorsports and Della Penna Motorsports.

But there was a very significant group of competitors that were not on the list. 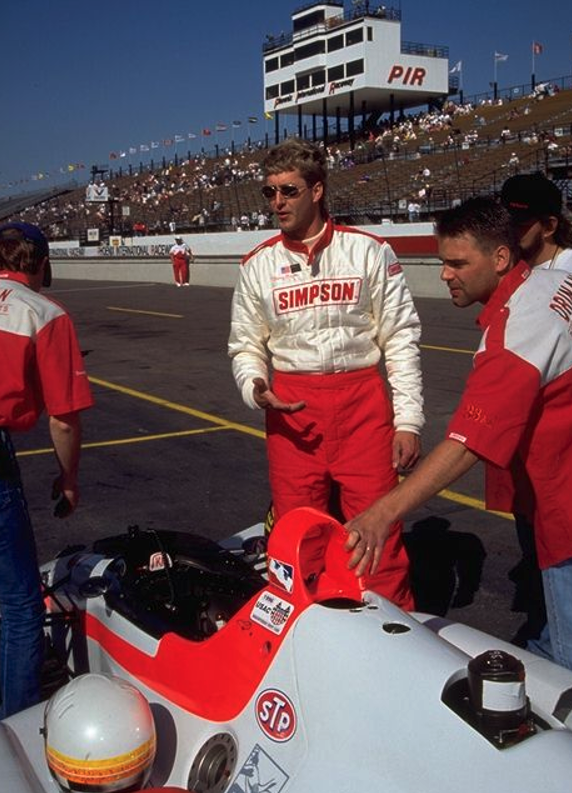 Mechanic-turned-driver Dan Drinan practiced in his 5-year-old Lola-Buick at Phoenix before heading to Indy. (Photo: IMS)

“The Stars and Cars” are missing from the Speedway

Walker Racing had just completed a successful 1995 Indy car season, with two race wins courtesy of their exciting young driver named Robby Gordon. Gordon had also done well to finish fifth at Indianapolis. But he would be caught on the other side of the “Split” in 1996.

Most of the established Indy car teams of the era competed in the national championship series sanctioned by Championship Auto Racing Teams (CART). Since the early 1980s, CART had aligned their technical regulations to allow their teams to participate in the Indianapolis 500, which had been separately sanctioned by the United States Auto Club during that time. But this alignment would come to an end as the IRL forged ahead with its plans for the new formula for the Indianapolis 500 and the rest of its new series, in direct conflict with CART’s plan to continue with its current turbocharged formula. 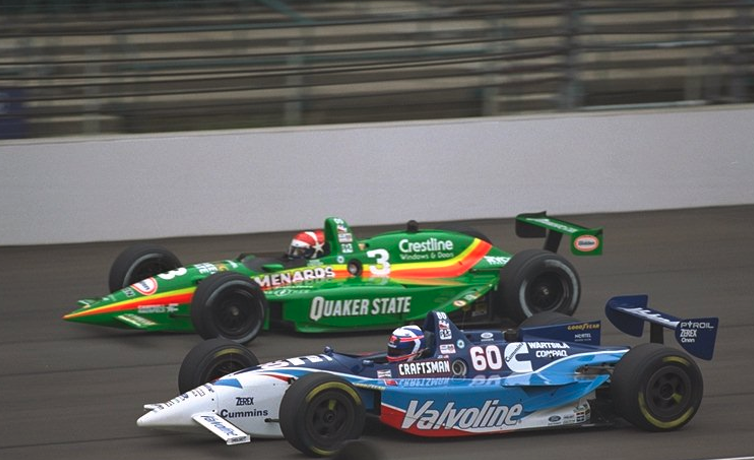 Walker Racing’s Mike Groff in a ‘95 Reynard-Ford, alongside Eddie Cheever in a ‘95 Lola-Menard. (Photo: IMS)

Those CART teams that wished to compete in the Indianapolis 500 would have to keep their ‘95 cars alongside their ‘96 cars (most of the teams had to purchase ’96 cars due to new technical regulations for CART). However, the prospect of facing the “25/8 rule” proved to be the biggest point of contention for the CART teams. In order to encourage participation in the fledgling series, the IRL had implemented a rule which guaranteed 25 starting spots at the Indianapolis 500 to IRL series points holders, with only the remaining 8 spots open to other competitors (including any CART teams that did not participate in the other IRL rounds). This rule played a major role in CART’s decision to stage the U.S. 500 at Michigan International Speedway on the same day, along with all the “star” drivers such as two-time Indy winners Al Unser, Jr. and Emerson Fittipaldi, and former champions Michael Andretti and Bobby Rahal. Only two teams managed to “cross the picket line” and attempt both races.

Walker’s star driver and new Reynards would compete at the U.S. 500 as part of their obligations as a CART entrant. The team had already sold a couple of ‘95 Reynards to IRL teams, but at least one chassis remained in their arsenal and would be legal to race at Indianapolis. In deference to their primary sponsors, Walker decided to enter the race with one of their Valvoline-liveried chassis for Mike Groff.

Galles Racing, likewise, attempted to race in both the Indy 500 and U.S. 500. The team’s new CART driver was the former motorcycle World Champion Eddie Lawson, who would face his first 500-mile superspeedway race at Michigan. In contrast, Galles’s Indianapolis 500 program would feature Davy Jones, a veteran of four Indianapolis 500 races. For Indy, the team entered a pair of ‘95 Lola-Mercedes/Ilmor, which would have been driven by either Adrian Fernandez or Marco Greco during the 1995 season. (It has been suggested that it is likely ex-Fernandez given the car was fitted with the same rear-facing camera pod also seen on Fernandez’s car during 1995.) The Galles team had the only Mercedes/Ilmor engines in the field, due to the fact that Ilmor (which was founded by CART owner Roger Penske) refused to supply any IRL teams with engines. However, this lone Mercedes/Ilmor was certainly not lacking in performance; it became the first car to set a new 1-lap and 4-lap track record during qualifying for the 1996 race, and eventually finished 2nd in the race. 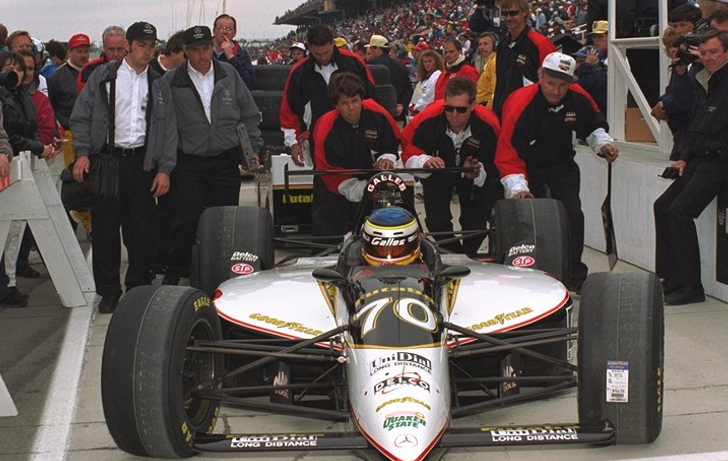 Galles Racing's Davy Jones would be in the lone Mercedes Benz

One longtime CART team uniquely raced in both the IRL and CART, but skipped the U.S. 500 in favor of Indy. Team Scandia, which had raced in CART since the early-1980s as Dick Simon Racing before being bought by Andy Evans in 1996, was one of the first teams to sign up for the new series. Already known for having a large fleet at recent Indianapolis 500s, the team lived up to its reputation with eight running cars, of which three were ‘94 Lolas, four were ‘95 Lolas and one was a newly-acquired ‘95 Reynard. Except for the Reynard, all these cars were likely the same ones that raced in 1995 and 1994 or served as backup cars for Simon. In particular, it is known that Alessandro Zampedri’s ‘95 Lola was the same one that Lyn St. James raced in 1995 before getting caught up in the first lap accident.

A source told me that Michele Alboreto’s Reynard was reported to be an ex-Team Green car on one of the radio broadcasts during the year. I have not yet been able to find this radio snippet, but a distinctive cut-out inlet on the Scandia Reynard’s sidepod cover matches one that was only seen on Jacques Villeneuve’s #27 race car throughout 1995. If this is correct, there is a nice coincidence that Alboreto also famously campaigned the #27 Ferrari in Formula 1, having taken an entry that once belonged to the late Gilles Villeneuve, father of Jacques! 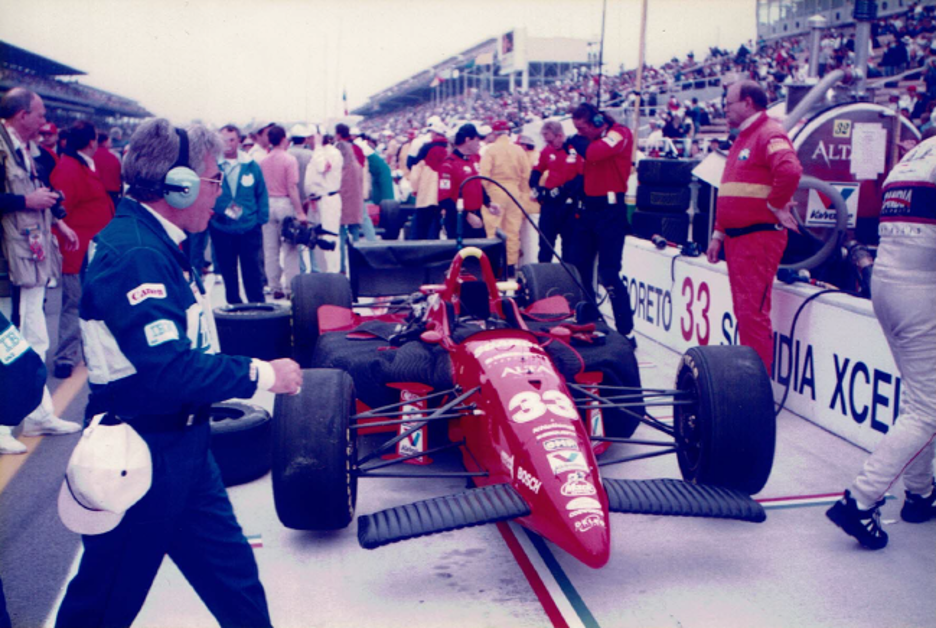 Although I’m still looking for more evidence to support this, I am fairly confident that Michele Alboreto’s car belonged to Team Green in 1995. (Photo: Mike Burrell)

Team Scandia would ultimately quit the CART series after the 1996 season, firmly committing itself as an IRL team. Scandia would join A.J. Foyt Enterprises as the two major “defectors” to the new series. Foyt had already chosen to race exclusively in the IRL in 1996, having spoken favorably of the series’ all-oval schedule and its goal of being more cost effective. The team entered two ‘95 Lolas and two ‘94 Lolas for the Indianapolis 500. Davey Hamilton’s ‘95 chassis was the same one used by Eddie Cheever in 1995. This means that the other ‘95 Lola, which was raced by Scott Sharp in 1996, may have been the same car that he previously raced in 1995! Finally, Marco Greco’s Lola, being a ‘94 model, was likely Bryan Herta’s ride in 1994.

No other CART team - including Penske, Newman/Haas, and Ganassi - would appear at Indianapolis in 1996. Alas, the deepening rift between the series meant that the increasingly sophisticated CART machinery would never appear at Indy again.