The 239 mph rocket: the technological pinnacle

Given the absence of any 1996 CART-spec cars and the “lower-tech” IRL formula that would begin in 1997, the 1996 Indianapolis 500 might well be considered the pinnacle of “Indy 500” car development, the end of a virtually unbroken thread of technical evolution at the Speedway since the inaugural race in 1911. With the limited amount of development that continued to take place on the ‘95 models between 1995 and 1996, as well as continued development of tires due to the Firestone vs. Goodyear “tire war,” some of the cars that showed up in 1996 were arguably the fastest race cars that ever drove onto the Speedway. One of those cars is still the fastest to this day.

Near the end of 1995, Jonathan Byrd, Fred Treadway and Andreas Leberle pooled together resources for an entry that would maximize the potential of the ‘95-spec formula. Byrd was a longtime entrant of Indy-only entries and Leberle was the owner of the Project Indy team which had entered CART races since 1994. Treadway was an Indianapolis-based businessman who had been involved with Project Indy in 1995 but was frustrated with racing towards the back of the pack; he now had ambitions to field a “championship team.”

After the Orlando race, Leberle split from the partnership but left the team with a ‘94 Reynard, which promptly won the second IRL race at Phoenix with Arie Luyendyk. This car soon became legendary as the all-time lap record holder with Luyendyk at the wheel and Tim Wardrop providing the engineering “magic.” This car’s history with the Forsythe-Green and Project Indy teams has been investigated in considerable detail in Henri Greuter’s article for 8W, so I will not repeat it here. However, I find it fascinating that this record car had actually entered the month as Luyendyk’s back-up. A newer ‘95 Reynard was Luyendyk’s primary car at Indy until it was determined to be slower than the ‘94 Reynard due to an unknown reason. The '95 Reynard was acquired from Walker Racing and likely served as a backup car for Walker in 1995.

Meanwhile, Leberle continued to enter races in the IRL under the Project Indy banner, first with a ‘93 Lola at Phoenix and then with a ‘95 Reynard at Indianapolis. The ‘93 Lola was likely the same chassis that was campaigned throughout the 1994 season and then finished a sensational 7th place at the 1995 Grand Prix of Miami with Christian Danner. The ‘95 Reynard was the same car that nearly won the Indianapolis 500 in 1995 with Scott Goodyear, albeit now with Ford Cosworth power instead of Honda. You might say that Andreas Leberle was certainly on the look-out for rocketships that year!

Arie Luyendyk’s Reynard 94I might have been even faster if it had a Honda engine. (Photo: Don Sklenka)

Luyendyk’s primary competition for outright speed came from the team he had driven for in the prior year. Menard’s 1996 entries included the very fast pair of cars that took the top two starting spots for the 1995 Indianapolis 500. In particular, the chassis that Luyendyk qualified 2nd and finished 7th in 1995 continued to be highly effective in 1996 by taking pole position with Scott Brayton. After Brayton tragically lost his life in a practice accident, the car was taken over by Danny Ongais, who raced it to 7th place.

Although team manager Larry Curry stated that there were six ‘95 Lola-Menard cars ever built, it appears that seven actually ran during the month; with one remaining chassis reportedly unassembled at the shop. Four of the cars qualified and raced, one car was withdrawn after qualifying (in a bid for a higher starting position with the previously mentioned car), one was tragically involved in Scott Brayton’s fatal crash, and the last one was briefly used as a warm-up car for Ongais, when he was brought into the team to replace Brayton. 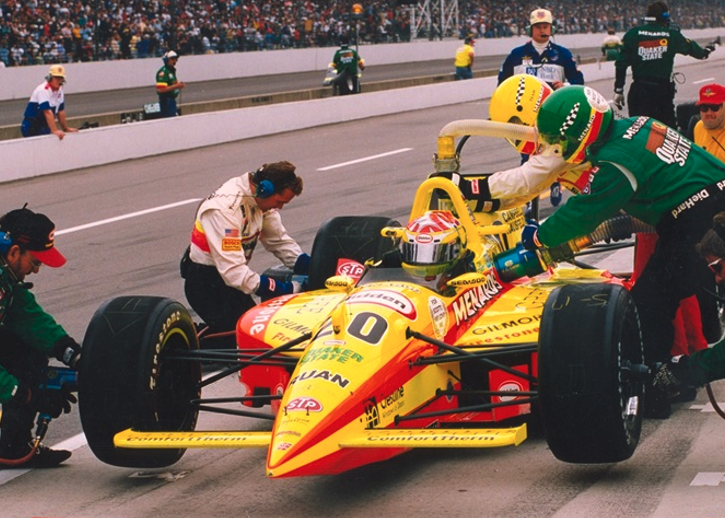 Tony Stewart was on the pace all month in this ‘95 Lola-Menard. (Photo: IMS)

The history of stock block engines at Indianapolis is a fascinating one, and Greuter covers it in his excellent piece for 8W. In short, there had been several noteworthy attempts to race these powerful but unreliable engines throughout the 1980s, but a manufacturer-supported Buick V6 program in 1991 and 1992 developed the engine into a serious competitor, taking the fastest qualifying speeds in both years and a 3rd place finish in 1992. Nonetheless, the engine was uncompetitive outside of Indy due to CART’s allowance of lower boost at their races, and Buick withdrew its support and handed over the engine program to Menard for 1993.

The Lola cars that Team Menard subsequently ran in 1993 and 1994 would reappear in 1996, now in the hands of “customer” teams that were making their debut at Indy. Despite being three years old, all of these cars lapped comfortably above the minimum 220 mph average required to qualify; in fact, John Paul Jr. and Johnny Parsons qualified faster than Team Menard had managed with the same cars in 1994, likely due to the track repaving and improved tires.

PDM Racing was the frontrunner of the ‘93 Lola-Menard group. The team was headed by Paul Diatlovich, a chief mechanic whose experience in Indy car racing began in 1977 and included an impressive run of cars prepared for four consecutive Rookies of the Year at Indy in the late 1980s. Their Lola, which was originally Geoff Brabham’s ‘93 Menard ride and now belonged to John Paul, Jr., was repainted in a hot flames livery and prepared in the former shop of the legendary car builder A.J. Watson from Leader Card Racers.

Blueprint Racing, from Blue Island, Illinois, acquired two ‘93 Lola-Menard cars in late 1995. This new team was owned by Ed Rachanski, who had experience rebuilding Offy racing engines in the 1980s and owned an aircraft engine rebuilding business. This same team, incidentally, would produce a shock victory at the following year’s race at Phoenix, defeating the very team that had provided them the equipment to enter the IRL!

Brickell Racing also had one ‘93 Lola, said to be the one raced by Nelson Piquet in 1993. However, this car narrowly failed to qualify despite efforts by PDM Racing to get it up to speed. Indeed, the level of camaraderie was such that it was not uncommon to see crew members from one team helping other teams. 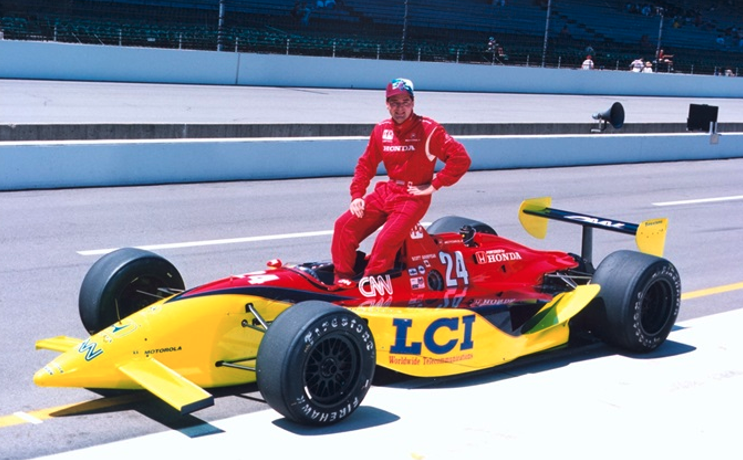 Seen here in 1995, this Reynard 95I infamously lost the 1995 Indianapolis 500 when Scott Goodyear was penalized from the lead after passing the pace car on a late restart. The car returned in 1996 with Johnny Unser, who did not start the race due to a mechanical problem. (Photo: IMS)

Tales of the thoroughbred machinery

While the ‘93 Lola-Menard contingent enjoyed reasonably competitive machinery, a number of teams ran older chassis with the standard stock-block Buick V6 engine. There were ten such entries, of which seven ran during the month and one qualified for the race. While these power plants were no longer supported by the manufacturer since 1992, they nonetheless continued to be built by various engine builders.

Three of these Lola-Buicks came from the American IndyCar Series. The aforementioned ‘91 Lola of Loop Hole Racing saw the most action; the ex-Alfa, ex-Pikes Peak racer was utilized by Tyce Carlson, Andy Michner and Dan Drinan to get through the Rookie Orientation Program. Drinan managed to get the car up to 215 mph before suffering an accident that destroyed the car.

Another AIS competitor, Tempero-Giuffre Racing, entered a ‘91 and a ‘92 Lola. Both cars struggled to get to competitive speeds. Joe Gosek, a super-modified champion and Indy rookie who drove both cars, was quoted in the Hungness yearbook that “We weren’t even fast enough to develop a baseline setup. I couldn’t tell if the car had a push or if it needed to be freed up to get through the corners.” Gosek reached a 196 mph average in the ‘91 Lola and 206 mph in the ‘92 Lola, before switching to a backup Team Scandia car, which he described as going from a “junker” to a “Cadillac.” 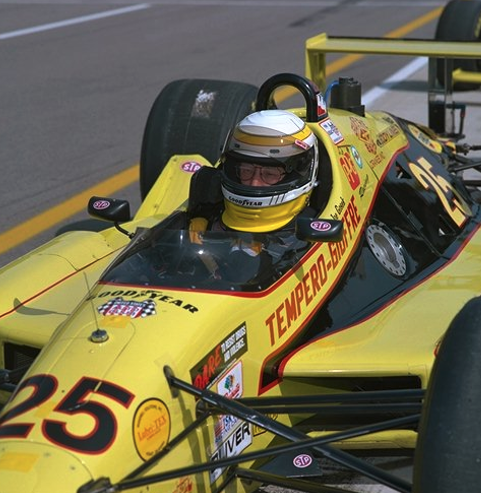 Joe Gosek struggled with this ‘91 Lola-Buick before jumping to a more competitive ride. (Photo: IMS)

The AIS cars were much maligned by critics of the series; an easy target for their lack of speed and dubious preparation. However, they should not detract from several other Lola cars of similar vintage that had some interesting pedigree.

Pagan Racing entered a ‘92 Lola-Buick with a particularly strong history; in fact, it entered the month of May 1996 as the reigning lap record holder from Roberto Guerrero’s pole run in 1992. This Lola had also been entered by Pagan in the 1993 and 1994 Indy 500s. In 1993, it was Jeff Andretti’s backup car, and in 1994, it was raced by Guerrero but crashed out early in the race. In 1996, this car was loaned to the Speedway to be offered to anyone who needed an opportunity to pass the ROP. However, only Billy Boat utilized the car for this purpose before attempting to qualify in one of the team’s newer cars.

Scott Harrington entered a ‘92 Lola that A.J. Foyt had originally used in his final 500, then sold to Dale Coyne, who entered the car in 1993 for Eric Bachelart with a tribute livery to the Marmon Wasp. After Bachelart crashed the car practicing for the 1993 Indy 500, the car became a show car before finally making its way to Harrington in 1996. Harrington had made some personal sacrifices to purchase the car; he had sold his vintage Porsche 911 to raise the funds necessary to buy the tub and “boxes of assorted parts.” The reasonably prepared car, which journalist Curt Cavin described as “clean as any on the Speedway’s grounds,” got to nearly 210 mph in practice before a crash on the Thursday before the second qualifying weekend. Harrington then struck a deal to race Richie Hearn’s backup Reynard instead. 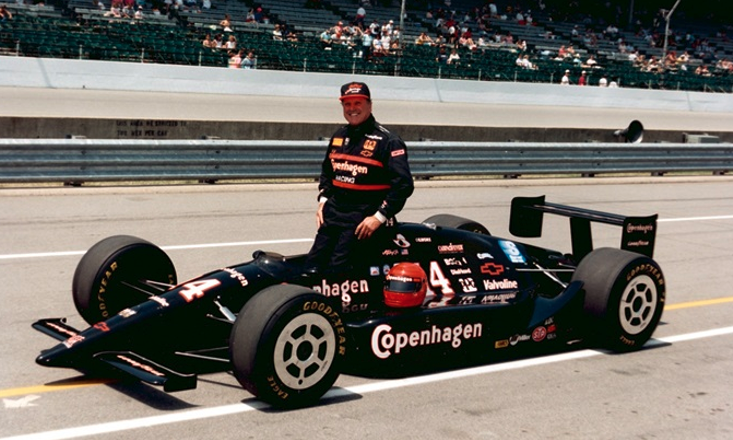 Although A.J. Foyt (seen here) would make his final start in the 1992 Indianapolis 500, his ‘92 Lola was just getting started. It would eventually find its way to Scott Harrington who practiced with it in 1996. (Photo: IMS)

The new ABF Motorsports team, owned by Art Bouilliane and Bill Warner, entered a ‘92 Lola-Buick that was previously raced at Indy by Scott Brayton in 1992 and Stephan Gregoire in 1993, then practiced by Dean Hall and Tero Palmroth in 1995. Darrell Soppe, who had previously worked at Penske and Newman-Haas before working with Buick’s engine program, engineered the car, and Louie Gennuso, lead mechanic, turned it into an immaculate machine. Their efforts were rewarded when Paul Durant qualified in excess of 225 mph, and the team was awarded a $5,000 "Overachiever" Award for achieving “the greatest qualifying success with limited resources.”

Randy Tolsma and McCormack Motorsports were not as lucky. Intriguingly, the team installed a Buick engine into a ‘93 Lola originally built for the more compact Ilmor engine (likely the same chassis used by Claude Bourbonnais in several CART events in 1994). The engine cover was visibly modified to fit the engine.

To cap off the project, Tolsma himself designed the livery and hand painted the lettering onto the car. This untried chassis-engine combination appeared on track during the second week of practice, but during a last-minute bid to get to qualifying speed, Tolsma unfortunately spun and damaged the car, ending his month of May.