A new opportunity for the “Indy-only” operations

One group of competitors that the Indy Racing League had in mind were the lower-budget teams that, in recent years, could only scrape together an Indy-only program. With engine leases and increasingly sophisticated technology becoming more of a financial burden on teams that could not commit to a full season, the IRL sought to make it a viable proposition for a team to race cheaply and competitively in events outside Indy.

Hemelgarn Racing had been a full-time competitor in CART during the 1980s, but scaled back to become an “Indy-only” team by the early 1990s. Having committed to the IRL, they made a serious bid to be competitive by purchasing two ‘95 Reynards from Chip Ganassi while entering another ‘94 Reynard that was likely the same one that was acquired in 1995 from Hayhoe Racing after Davey Hamilton crashed his primary car. On the other hand, Buddy Lazier’s winning car was the same one that Jimmy Vasser had crashed in 1995, but it showed immediate pace in 1996 by winning the pole position at the inaugural IRL race at Orlando. 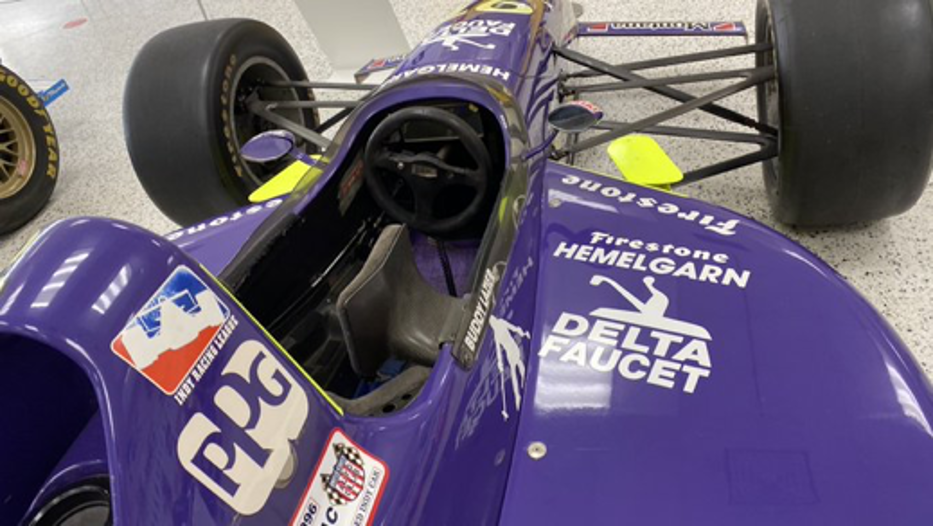 Buddy Lazier’s Reynard 95I is now on display at the IMS Museum. (Photo: Don Sklenka)

Pagan Racing entered a ‘95 and ‘94 Reynard, as well as the aforementioned ‘92 Lola. The ‘95 Reynard was purchased from Forsythe Racing prior to the start of the 1996 season and became Roberto Guerrero’s race car for the 1996 Indy 500. The ‘94 Reynard had been raced by Michael Andretti at Indy in 1994 with Chip Ganassi Racing. Originally Ford-Cosworth powered, the chassis was sold to Galles Racing and converted to Ilmor power. It was sold again to Pagan at the beginning of 1995 to be raced by Guerrero at Indy. Following the 1995 season, the car was reconverted to Ford-Cosworth (“a rather expensive undertaking” according to owner Allan Pagan) and raced at the first two rounds of the 1996 IRL season. Billy Boat qualified this ‘94 Reynard for the 1996 Indy 500 but was bumped from the field. 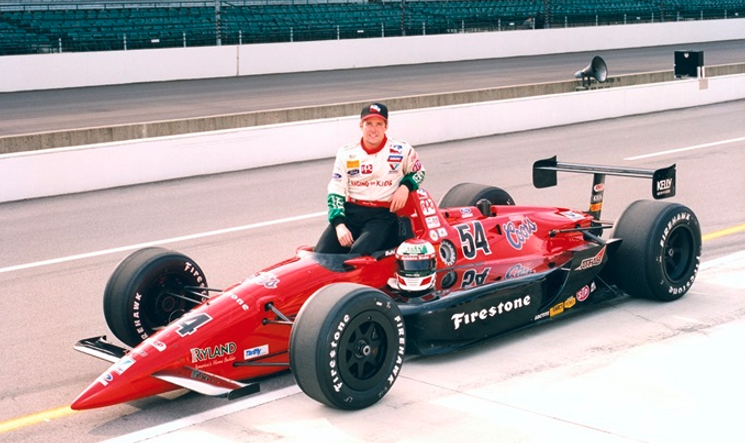 Beck Motorsports entered two ‘94 Lola cars for Robbie Buhl and Hideshi Matsuda. Buhl’s car was originally with Arizona Motorsports and had served as Al Unser Sr.’s final ride in 1994 and then failed to qualify with Jeff Ward in 1995. The other chassis was originally with Dick Simon/Team Scandia, then sold to Leigh Miller, who entered the first two races in 1996 with driver Stan Wattles. After Wattles was injured during the Phoenix weekend, the car was sold to Beck, along with the “guaranteed spot” for the race under the Speedway’s controversial “25/8” rule.

This ex-Miller car was ultimately used by Matsuda. In turn, the ‘94 Lola that Matsuda had raced in 1995 for Beck had been sold to Zunne Group Racing and served as Lyn St. James’s car for 1996. Interestingly, St. James’s car had originally started life as a Firestone test car in 1994 but ended its career on Goodyears!

The new teams with serious intentions

This leaves three other new teams for 1996: Della Penna Motorsports, Bradley Motorsports, and Cunningham Motorsports, none of whom had previously raced at Indianapolis or in the CART series. But their use of ‘95 Reynard chassis clearly showed their intention to be taken seriously.

Della Penna Motorsports had just won the Toyota Atlantic championship with Richie Hearn, and both the team and driver were looking to graduate to the top level of the sport for 1996. Their effort to become contenders in the IRL series included acquiring a ‘95 Reynard chassis from Arciero-Wells Racing that was previously used by Hiro Matsushita. Their other chassis had belonged to Forsythe Racing in 1995 and was the same car that Teo Fabi previously raced at Indy, finishing 8th in 1995. Hearn expressed a preference for the ex-Matsushita chassis and would race it to 3rd place in 1996. The ex-Fabi car was provided to Scott Harrington. 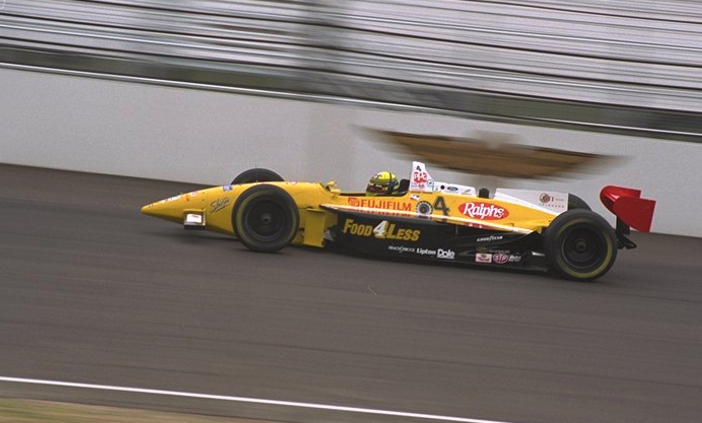 Richie Hearn had a competitive month in this ex-Hiro Matsushita ‘95 Reynard-Ford. (Photo: IMS)

The Bradley team had spent the last few years in Indy Lights with Buzz Calkins, and although they never won in that category, moved up to the IRL for 1996 and made an immediate impact by winning the inaugural race at Orlando. Their one Reynard chassis was acquired from Walker Racing and was the same car that Christian Fittipaldi drove to 2nd place in the prior year’s Indy 500.

Della Penna and Bradley carried the new Ford Cosworth XB Series 2 engines, while most of the other entries, including the winning Lazier car, used Series 1.5, which at the time was regarded as the more reliable power plant.

The Cunningham team, which had previously won an IMSA championship with their factory-supported Nissan 300ZX, purchased a new ‘95 chassis from Reynard in kit form. The team had instructed Johnny O’Connell to avoid damaging the car during the first two races of the season in order to “save it for Indy” and only had 955 miles of mileage heading into the month of May.

Some notes for those who may be keeping count of the cars so far: Of the 28 entries that did not appear on track, most of them were additional entries to the teams previously mentioned in this article, and probably represented incomplete cars or entries filed to obtain additional garage space for primary entries.

Some teams had previously competed at Indianapolis but did not appear at the Speedway at all. These included Euromotorsport (entering under the Osella USA banner), Arizona Motor Sport (which sold at least one of its cars to Beck) and Burns Motorsports.

Treadway also had an ‘94 Reynard entry named after Average Joe’s Pub and Grub, a sports bar that was owned by Fred Treadway himself. However, based on inquiries with Average Joe’s (still in business as of 2020!) and Byrd Racing, an actual car with this sponsorship did not exist.

To what extent did CART enable the IRL by “selling off their old cars”?

To the best of my knowledge, these were the transactions that occurred between CART teams and IRL teams before the 1996 Indy 500. All these represented sales of Reynard 95I chassis.

Of the 49 cars that practiced for the 1996 Indy 500, 9 cars (18%) were recently sold by a CART team to an IRL team, although the definition of “IRL team” is somewhat blurry. The asterisk (*) denotes the teams that ran a partial season in CART during 1996. Scandia would convert into a full IRL team, while Della Penna and Project Indy left the IRL after 1996 and became full-time CART teams in 1997.

On the other hand, 33 cars (or 67%) were brought over directly by the “defecting” teams (led by Foyt, Menard and Simon/Scandia) either to use themselves or sell to other teams who were starting up in the IRL. Most of these were reasonably competitive cars that were from 1993 or newer. Menard and Simon/Scandia appeared to have been the main parties who sold or leased cars to upstart teams, but several other cars also transferred hands between various Indy one-off teams. Included in this total are also the five new cars that were reportedly ordered from Lola and Reynard.

The three cars from the AIS made up 6% of the entry list. Although these cars could ultimately trace their origins to a CART team, they were more recently running in the AIS and were unlikely to have been specifically purchased for the 1996 IRL campaign, so I do not count these as part of a CART “sell-off.”

The old Lola that Harrington purchased had been a show car, but I do not know whether he had purchased it from Dale Coyne (the last team that raced the car) or another source. 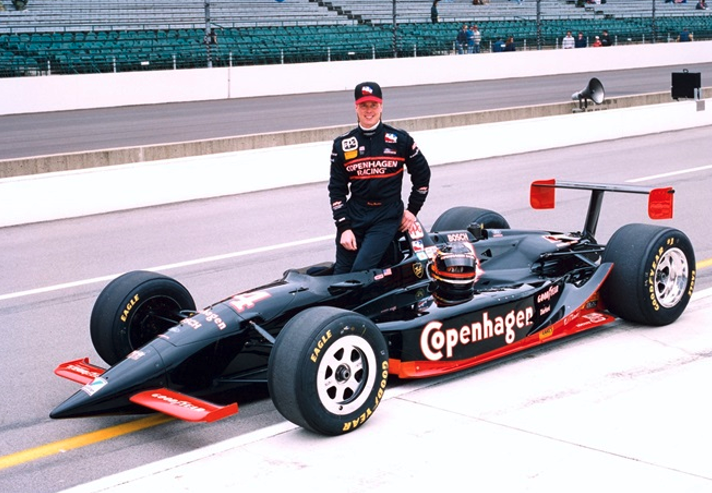 Finally, there were three cars that were entered by Walker and Galles, the only two full-time CART teams that participated in the ‘96 Indy 500, using machines that they had already owned from the prior season.

An interesting question is: could the IRL have been viable in 1996 if CART had not sold any of their old cars to the new IRL teams, and boycotted the event altogether? Based on the above analysis, there would still have been just enough cars to fill the 33 spots (I do not count the AIS and Harrington entries, which would have struggled to meet the minimum speed requirement of 220 mph). All that would have been needed to have some more competitive “bumping” is for several teams to utilize the other ‘93 and ‘94 Indy cars that would have been available and able to reach competitive speeds. A major storyline, Menard vs. Luyendyk, would still be intact in such a scenario, and the cash saved from having to purchase newer Reynards may have even put the IRL teams in a better financial position for the coming year.

Now what if the opposite had happened - that CART teams came to the IRL en masse - even participating in the first two IRL races to guarantee themselves a spot? Now that is the stuff of endless speculation and somewhat beyond the scope of this article. But I will leave with one thought. Luyendyk said in the Hungness yearbook, “The best combination in Indy car today at 45 inches (boost) would be a Honda in the back end of the car.” In fact, Treadway was working on a Honda engine deal for 1996, but Honda ultimately did not want to supply engines for two races on Memorial Day weekend. Had the U.S. 500 not been run by the CART teams, we might have been treated to an epic battle between Luyendyk, Menard, Ganassi and the other Honda/Firestone teams. That would have been a story for the ages!

I would like to thank Mike Burrell, who worked at the Indy 500 in 1996, for providing his firsthand knowledge of the cars and teams and some of the photos in this article.

Thanks also to Jeroen Demmendaal, who provided feedback on a draft of this article and helped me particularly with some of the words in the introduction.

Other sources include the following:

I have tried to include information from reliable sources. However, I would appreciate any corrections, additional information or feedback. Please contact me at skchow03@gmail.com.

SK has been a fan of Indy car racing since the mid-1990s. In addition to collecting motorsports related books and magazines, SK enjoys playing and modding the Papyrus IndyCar Racing 2 game.